How many times have you looked at endless task lists, dozens of unread emails, and mountains of paperwork… and felt utter dread at the thought of working on them? And even looked at the clock and hoped it was near the end of the day, just so you could call it quits?

I’ve been there, so I know exactly what it’s like to want to disappear and pretend like work doesn’t exist. Of course, just because you don’t feel like doing the work, doesn’t mean it’s going away. Unfortunately, most of the typical motivational tactics out there never worked out for me, so I had to come up with some counterintuitive methods to rev up my motivation and actually get some work done.

So if you’re in the same boat as me and struggle to get motivated sometimes, know that it doesn’t have to be this way. 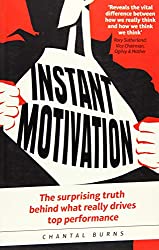 Your Brain Is Attuned To The Wrong Thing

The big problem here is that you’re too focused on the incorrect thing – and that’s the fact that you’ve got a lot of work to do. So naturally, when all your attention is focused on something you “don’t” feel like doing, your mental resistance is going to rise and take over.

And what does that lead to? A severe case of procrastination. And no matter what type of work you need to do (even if it’s related to a big goal you’ve always had), this problem can rear its ugly head and take you out of your game.

When it comes to motivation, people are generally told to use methods like SMART goals or visualizing yourself succeeding. Well, those things might work for some people. But in my experience, they fail HARD when it comes to creating the instant motivation you need – especially when your mood and energy are in low supply.

And why is that? Because they don’t redirect our focus and emotions onto productively compelling things.

“The only difference between ordinary and extraordinary is that little extra.” – Jimmy Johnson

Rather than using the popular motivation tactics seen online, I suggest trying something that most people haven’t really done before. Basically, we’re going to change your focus onto tactics that (while a bit odd or scary) will urge you to act on your goals in the NOW – so let’s take a look.

Related : Luck Is What Happens When Preparation Meets Opportunity

1. Have a punishment system

Even if people don’t like it, a person is twice as likely to work in order to avoid a punishment, rather than working towards a reward instead. This is something Daniel Kanheman (a well-established expert on motivation and author of “Thinking, Fast and Slow ) discovered in his many psychology experiments. So rather than focusing solely on getting a treat for good behavior, it’d make sense to find a way to create consequences for not doing your work instead.

Here’s a few ideas to work with:

Anyway, the point is to make the “good” option seem like a walk in the park compared to the cost of not doing it. You can even combine this with rewards for extra motivational punch.

We never really grow out of peer pressure. So if everybody around you is pressuring you to do something (whether good OR bad), you are FAR more likely to do it.

Try getting your friends and family to “peer pressure” you into working on your goals. For example, once you get home from work, the first thing you’ll want to do is kick back and relax. But if your family starts to “gang up” on you, and eggs you on to get some exercise in, then it’d probably be hard to refuse them.

In fact, you’d probably find it hard to “not” go to the gym if that were the case. So see if you can foster a productive culture around your close ones. That way, you’ll never let your laziness or mood dominate your actions, and you’ll be able to stay on point with your goals.

“Work hard for what you want because it won’t come to you without a fight. You have to be strong and courageous and know that you can do anything you put your mind to.” – Leah LaBelle

3. Turn Your Fears Into Trash-Talking Rivals

This is kind of an interesting one. It’s similar to the previous tip, but with an even sharper edge to it. If you’ve ever been on a sports team, and were the receiver of trash talk before, you know how infuriating it can be to have somebody do this to you.

But the important thing is that whenever it happens, that rage instantly transforms into a desire to obliterate your opponent. And trust me when I say this is a power you should not ignore.

A trick I came up to use this is whenever I’d be nervous to send an email proposal to a client (or  if I needed to open their email and read their possibly negative response) is I’d imagine a person saying things to me like, “I bet you won’t send it,” or “You’re too scared to open it, aren’t you, scaredy cat?” Then I’d get annoyed and eventually get it done. And it always worked.

It’s odd, I know. But when wielded well, it works amazingly. And it does especially well when you’re avoiding a task due to anxiety. It’s probably because it doesn’t mask your anxiousness, it redirects it and focuses instead.

I know these motivation methods are a bit strange. But when you’ve tried everything else, and you’re still struggling to overcome procrastination, it’s time you look outside of the box if you want to become successful in life. So give these methods a shot and see if your motivation soars because of it.

Related : 10 Best Of All Time Books on Success