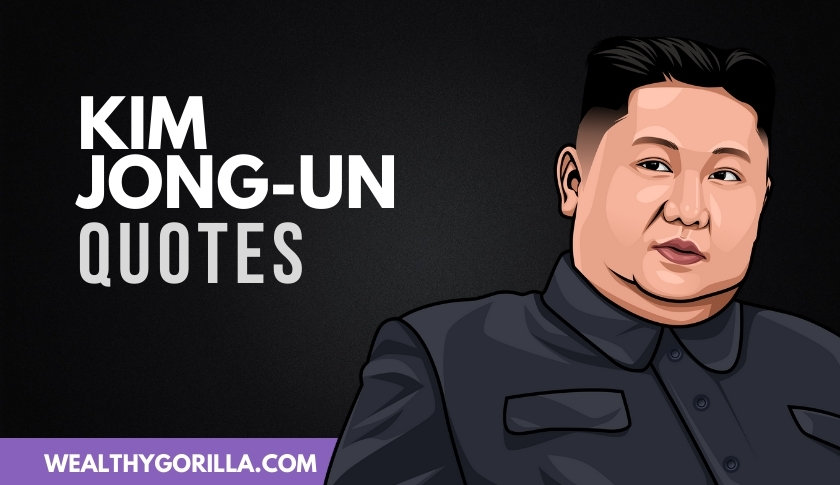 Which are your favorite Kim Jong-un quotes?

Kim Jong-un is the supreme leader of North Korea. In North Korean media, he is often referred to as ‘Dear Leader’. Kim rules a dictatorship where elections are not free and fair

In December of 2011 when Kim Jong-il died, Kim Jong-un was publicly declared Supreme Leader only a few days later.

As the leader, Kim Jong-un has been at the forefront of countless controversies due to alleged crimes committed by his nation, such as torture, abductions, and many others.

Here’s our collection of the notorious Kim Jong-Un quotes:

1. “It is a proud tradition and fighting trait of our army and people to rise up like mountains and go through fire and water to unfailingly carry through the party’s orders and instructions.” – Kim Jong-Un

2. “Our party and the Republic’s government will go hand in hand with anyone who truly desires the country’s reunification and the nation’s peaceful prosperity and will make responsible and patient efforts to accomplish the historic cause of the fatherland’s reunification.” – Kim Jong-Un

3. “Songun is a proud tradition of the Korean revolution which was pioneered by Comrade Kim Il Sung and led by him and Comrade Kim Jong Il and the banner of victory and glory.” – Kim Jong-Un

4. “The people’s army should always maintain a highly agitated state and be equipped with full fighting readiness so as to smash the enemies with a single stroke if they make the slightest move and achieve the historic cause of the fatherland’s reunification.” – Kim Jong-Un

6. “We should raise fierce flames of innovations in the vanguard sectors, basic industrial sectors, and all other sectors of the national economy.” – Kim Jong-Un

7. “Developing the locally-run industry is very important in increasing the production of consumer goods.” – Kim Jong-Un

8. “Our cause is just, and the might of Korea that is united with truth is infinite.” – Kim Jong-Un

10. “The military might of a country represents its national strength. Only when it builds up its military might in every way can it develop into a thriving country.” – Kim Jong-Un

11. “Those who do not cherish affection for their parents, spouses, and children and for their homes, villages, and workplaces cannot love their country and fellow people; they can never become genuine patriots.” – Kim Jong-Un

12. “We should make innovations in coal-mining and metallurgical industries in particular so as to revitalize the overall economy of the country.” – Kim Jong-Un

13. “Comrade Kim Jong Il, who was faithful to Comrade Kim Il Sung’s ideas and cause, led our revolution along the glorious road of victory, braving the severe trials and adversities of history by dint of his unique leadership of the Songun revolution.” – Kim Jong-Un

14. “Nothing will be beyond our reach when we make the flames of creating positive deeds flare up across the country with the virtues of the young vanguard as the initial spark and bring into full play the mounting vigour of the millions of young people.” – Kim Jong-Un

15. “Past records of inter-Korean relations show that confrontation between fellow countrymen leads to nothing but war.” – Kim Jong-Un

16. “The industrial revolution in the new century is, in essence, a scientific and technological revolution, and breaking through the cutting edge is a shortcut to the building of an economic giant.” – Kim Jong-Un

17. “There is nothing that our party failed to do when it trusted the soldiers and people, and a more resplendent future is unfolding before us today.” – Kim Jong-Un

18. “We should improve economic guidance and management as demanded by the developing reality.” – Kim Jong-Un

19. “All sectors of the national economy should make scrupulous arrangements for economic planning and guidance to boost production by tapping every possible reserve and potentiality, and work out in a scientific way the immediate plans and long-term strategies for stage-by-stage development and push ahead with them in a persistent manner.” – Kim Jong-Un

20. “It is our Party’s unshakeable stand to prevent a new war from breaking out on the Korean peninsula and accelerate economic construction in a peaceful environment, thus resolving at an early date the problems related with the people’s livelihood.” – Kim Jong-Un

22. “The idea of the Songun revolution is an idea of giving importance and precedence to military affairs in implementing the masses’ cause of independence, the socialist cause, and pushing ahead with the overall revolution and construction with the revolutionary army as the core force.” – Kim Jong-Un

23. “There is no force in the world that can block the powerful march of our army and people, who are holding high the banner of the suns of great Comrade Kim Il Sung and great Comrade Kim Jong Il and continuing to advance under the leadership of the party and with strong faith in sure victory.” – Kim Jong-Un

24. “We should educate all Party members and other working people to become genuine patriots who first love their parents, spouses, and children and further sincerely shed sweat and dedicate their all to spruce up their homes, villages, and workplaces so that they are better than others’ and add lustre to their country, their motherland.” – Kim Jong-Un

25. “All sectors and all units of the national economy should launch a vigorous general offensive to boost production in hearty response to the Party’s militant slogan.” – Kim Jong-Un

26. “It is important to launch a mass and society-wide struggle to drastically increase the production of consumer goods.” – Kim Jong-Un

27. “Our Party’s policies of respecting the people and loving them and the people’s hearty loyalty of trusting and following the Party as they would do their mothers have become integrated, and thus the blood-sealed ties between them have reached a new, higher stage.” – Kim Jong-Un

28. “The days are gone forever when our enemies could blackmail us with nuclear bombs.” – Kim Jong-Un

29. “The sun flag of the great Comrade Kim Il Sung and Comrade Kim Jong Il will forever flutter in the van of our revolutionary ranks that display only victory and honor and will always encourage and drive us toward a new victory.” – Kim Jong-Un

30. “We must well grow the valuable seeds, which the great Comrade Kim Jong Il sowed to build an economically powerful state and improve the people’s livelihood, and lead them to bloom as a glorious reality.” – Kim Jong-Un

Thanks for viewing this collection of the best Kim Jong-Un quotes. Don’t forget to share them with your friends and family on social media.