Failure feels terrible. It’s demoralizing, embarrassing, and can wreck your self-confidence if you let it. However, failure can be one of your most valuable teaching tools if you’re willing to learn some hard lessons.

Having the courage to fail can pay huge dividends in your life and your career. When you’re not afraid of failing, you’re more likely to take risks in your career. And being willing to take risks – and even fail along the way – can strengthen your reputation, help you come up with innovative and original ideas, and lead to new opportunities. It can help you start a new business, land a job you love, and follow your craziest dreams.

On the flip side, the fear of failure can hold you back from success in all areas of your life. It can prevent you from pitching your boss on that idea that could lead to a great promotion. It can prevent you from being yourself in a job interview, writing that book you’ve always dreamed about, or starting a new business that might change your life.

Failure isn’t fun for anyone, but learning how to fail and, more importantly, having the courage to fail can accelerate learning and open up opportunities you never could have imagined before. 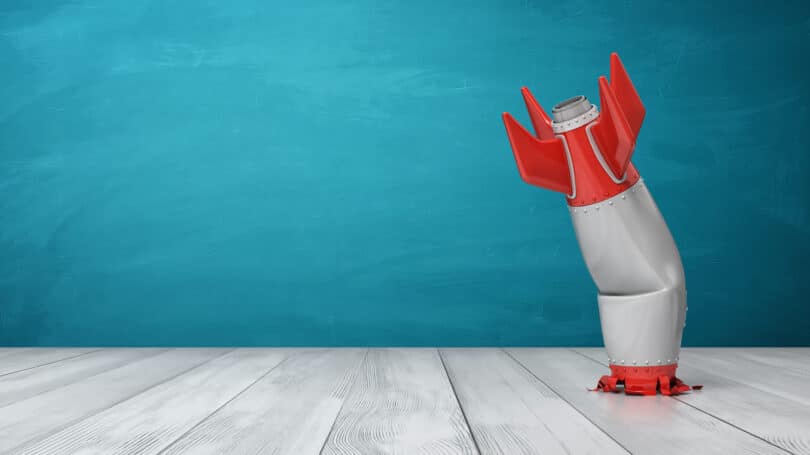 In 1995, a young British woman’s short marriage had just dissolved. She was now an unemployed single parent and, as she said in her Harvard commencement speech, “as poor as it is possible to be in modern Britain without being homeless.” Every fear she’d ever had about herself had now been realized; she was the biggest failure she knew.

Many people in similar circumstances would have given up. No one wants to hit rock bottom, but that’s exactly where this young woman was. So with nothing left to lose, she began working on a little story about a boy born with magical powers, a boy she’d imagined years ago.

When she finished the book, she sent it to publisher after publisher – and received over a dozen rejections  No one wanted to publish a fantasy book for children. Despite these setbacks, she kept submitting her manuscript hoping to at least earn enough to put food on the table. She simply refused to give up.

You likely don’t need me to tell you what happened after that: J.K. Rowling’s “Harry Potter” novels became some of the best-selling books of all time, and she’s now one of the richest women in the world. However, Rowling’s success story only happened after multiple failures, each of which tested her courage and persistence.

Imagine what would have happened if she’d given up, convinced herself her book idea was lousy, and tossed the manuscript in the trash after her first rejection – or her second or her 10th. Hundreds of millions of children would have missed out on the joy of reading “Harry Potter,” and Rowling’s daughter would likely have grown up in poverty.

You might not strive to become one of the richest people in the world, but stop and think about the opportunities you might have missed because you gave up after one or two – or 12 – setbacks. We can all come up with a laundry list of times we’ve given up, and while it’s not productive to dwell on the past, it is productive to realize we can change our behavior and learn how to be persistent when things get tough.

The Importance of Failure 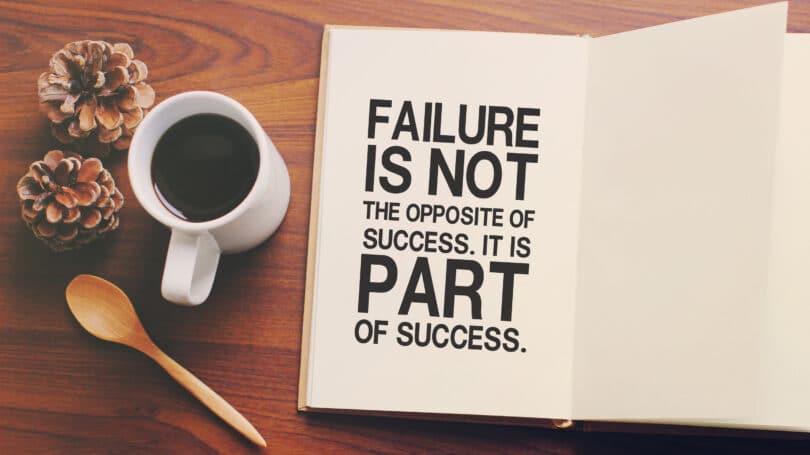 Failure is an uncomfortable experience. Most of us are taught from a young age that failure is bad, and we begin to fear any misstep or idea that might put us in failure’s path. Over time, we may find it easier to just play it safe. We don’t take big risks or pursue crazy ideas because we’re afraid of failing and don’t want to be seen as “deficient” by others.

But playing it safe all the time often leads to a life of mediocrity. We end up stuck in a job we hate instead of doing something we really love. We ignore our talents and instead pursue hobbies or interests that aren’t too challenging, never reaching our full potential. In short, we end up living a life that pales in comparison to the life we could be living if only we weren’t so afraid of screwing up.

Business legend and author John C. Maxwell believes the difference between average people and high achievers is how they view and respond to failures and setbacks. High achievers see failure as a chance to learn and try again using their new skills or knowledge, while average folks associate failure with defeat. This defeat, they believe, reflects shortcomings in their character or abilities. They failed, so they believe they are a failure. However, nothing could be further from the truth.

Basketball legend Michael Jordan told authors Robert Goldman and Stephen Papson in their 1998 book “Nike Culture: The Sign of the Swoosh,” “I’ve missed more than 9,000 shots in my career. I’ve lost almost 300 games. 26 times, I’ve been trusted to take the game-winning shot and missed. I’ve failed over and over and over again in my life. And that is why I succeed.”

You can’t succeed at anything without failing first. Jordan understands that failure is an essential component in the learning cycle. Failure is so valuable because it hurts. It forces you to take one of two paths: You can choose to give up and do something else less challenging, or you can choose to learn from the pain of your failure and try again using what you learned to secure future success.

How to Learn From Your Mistakes 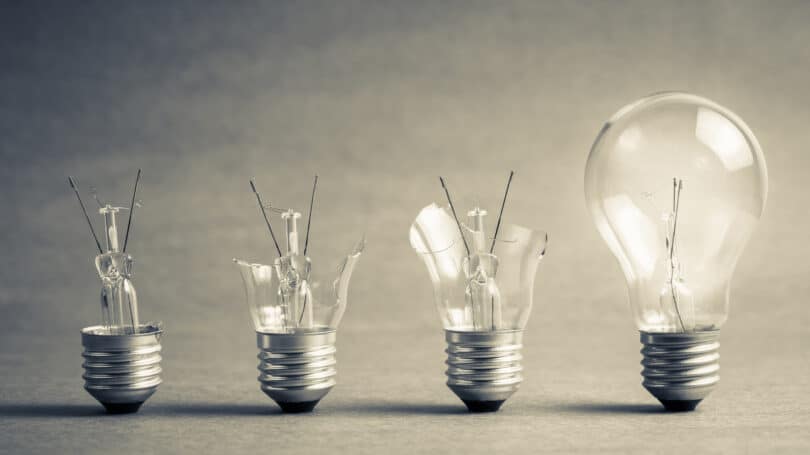 You can’t go through life without failing at something. And if you’re like most people, you’re going to fail repeatedly.

That’s why it’s so beneficial to reexamine how you see failure. By changing your perspective and having the courage to find out where you went wrong, you’ll be able to bounce back from your setbacks and improve your chance of success later.

Learning from your mistakes takes a certain amount of vulnerability and feels really uncomfortable at times. But examining where you went wrong is a life-changing learning experience if you don’t skip any steps.

Before you can do anything, you first have to acknowledge you messed up. Yes, you.

Taking responsibility for your mistakes and failures can feel uncomfortable. But you can’t make things right and improve unless you acknowledge your role in the situation.

So, own up to what happened. If your failure impacted others, admit your mistake, apologize, and let them know it will never happen again. Once you take responsibility, you can move on to the next step.

2. Realize You’re Not Good Enough …Yet

This is another tough pill to swallow. When you fail, you have to come to the uncomfortable realization that you are not good enough.

It stings, right? No one wants to look at themselves in the mirror and realize they’re not good enough. But there’s an important word we need to add in here: yet. You are not good enough – yet. Yes, you failed this time. But you can do better.

Your failure, whatever it is,  provides you with some really important feedback if you have the courage to look for it.

You have the power to learn from your mistakes and improve so you succeed in future interviews. You’re not good enough now. But you will be.

3. Reflect on Your Experience

It can be difficult to figure out where you went wrong, especially when you’re feeling emotional about a setback. Writing out your thoughts and feelings in a journal can help you sort out and analyze what you’re feeling and give you a fresh perspective.

Next time you experience a failure, set time aside at the end of the day to write about what happened. Get all your emotions out on paper first. Talk about your anger, your frustration, your embarrassment – whatever you’re feeling, write it out. Once you’ve purged all these feelings, you’ll feel calmer and be better able to look at the situation clearly and see where you went wrong.

It also helps to write out why you don’t want to make this mistake next time. Did this mistake hurt your reputation? Hurt a colleague? Lead to a financial loss?

Be specific about what happened and why it can never happen again.

Business titan Richard Branson knows a lot about failure because he’s failed many, many times in his life and career. As he writes on the Virgin blog one of his failures, attempting to circumnavigate the globe in a hot air balloon, almost cost him his life.

But Branson’s mistakes have taught him how valuable failure is. He writes, “Taking risks is meant to feel scary, but overcoming this fear is our only ticket to experiencing new and exciting things. We should all learn to embrace it rather than fear it. It is one of our greatest learning tools.”

For most people, the word “failure” is loaded with negative connotations. This is why it can be helpful to view your missteps as learning experiences. You’re learning how not to achieve your goal. That’s all. So get up and try a different approach.

I started my first business when I was 22, and I’ve been self-employed ever since. With almost two decades of entrepreneurship under my belt, I can safely say I’ve learned far more from my failures than I have from my successes.

The hardest and most important lesson I learned early on was how not to treat clients. I still cringe when I think of the colossal failure that taught me that lesson.

One of my clients wanted to use content I’d created for my personal blog for his own marketing purposes. He asked in advance, but the way he approached me about it struck a nerve and I lost my temper. An older and wiser me would have taken a deep breath and waited 24 hours before responsponding to the email. But my inexperience and rashness won the day, and I responded with a blistering email that was harsh and insulting.

The day after it happened, I wanted to crawl under a rock and disappear. Of course I lost the client, as well as my self-respect. It still stings 15 years later and likely always will.

However, without that huge failure on my part, I might not have learned the right way to treat clients: with respect and dignity in every situation, even emotionally charged ones. Yes, it was painful and embarrassing. But I believe that one lesson has greatly contributed to my success, and it has certainly made me a better person.

Every failure you experience can make you a better, stronger person if you’re willing to own up to what you did wrong and learn to do better.

What has been your biggest, most painful mistake? What did you learn from it?